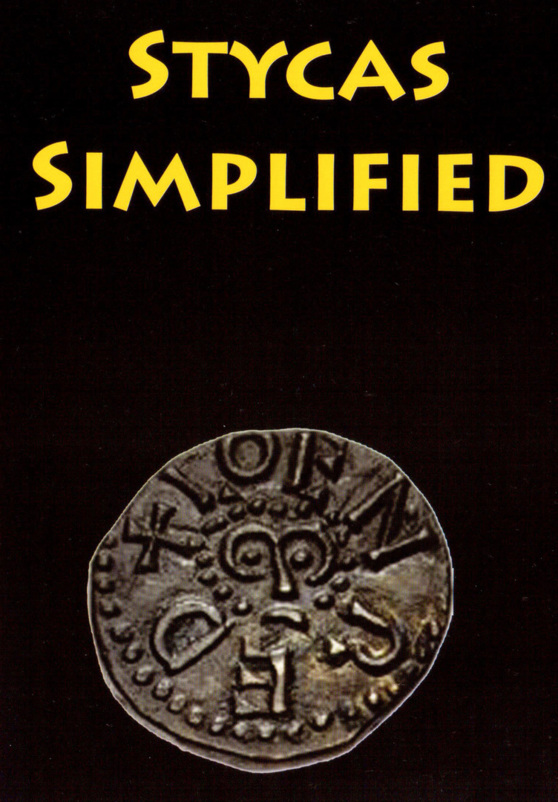 An illustrated and priced catalogue of stycas for collectors

The first edition of Sceatta List included a separate catalogue of Northumbrian stycas, amongst the simplest of currencies. Stycas state the name of the issuer, monarch or archbishop, on the obverse and the moneyer’s name on the reverse. There are six regal issuers, three ecclesiastical and thirty-six moneyers. The only elaboration is the repertoire of around fifty different central geometric devices. So why is the classification so opaque?

The problem arises towards the end of Eanred’s reign when there is a substantial increase in the number of moneyers in an effort to increase the volume of stycas produced. This is accompanied by a decline in mint discipline. Dies are matched promiscuously and combinations proliferate. The output seems to be the product of a system which sets no store by the matching of moneyers with central devices, which are used in various combinations, adding further permutations to the typology. Standards of literacy vary and both legends and individual characters appear in various scripts and orientations.

After displaying remarkable dedication to this rather unattractive base currency, Liz Pirie built an unparalleled corpus of stycas only to spoil the effort by publishing, against the well-meant and diplomatic advice of virtually every leading numismatist in the field at the time, a classification, in Coins of the Kingdom of Northumbria, which stifled further research for two decades.

Rather than remaining faithful to the well-attested chronology of monarchs and moneyers, Pirie creates her “phases and groups” which take precedence over the strict chronology. The emissions of one moneyer for a specific monarch may be catalogued in different places; different issuers appear in parallel. Huge effort is expended on accommodating the later blundered stycas in the classification when clearly these were produced in such chaotic circumstances as to make their individual variations of negligible significance. The form in which a name is rendered (with some validity), and the choice of central motif (more dubiously), are regarded as primary criteria of classification. Had this resulted in an elegant and accessible arrangement, then much could be forgiven. However, the outcome is impenetrable. To locate a single sub-variety demands far too great an investment of time in headache-inducing, eye-straining concentration necessitating inconvenient comparison of images across numerous pages.

Is there a better methodology? How does Tony Abramson overcome this obstacle? For the casual enquirer, there is a much-simplified approach. However, it does involve one heretical step, at which the purist may recoil. One must divorce the obverse and reverse and consider issuers and moneyers separately rather than in combination. By this means, and by largely ignoring the proliferation of central motifs, the entire corpus suddenly falls into a neat, accessible arrangement facilitating both identification and structured collecting.

This heresy may prevent the methodology from providing a basis for reclassification and, in any event, this is not the intention. Abramson is simply attempting to lift the veil - to bring stycas back out of the shadows and cast some light on their easier identification.

Stycas Simplified catalogues the main varieties separately for the two groups of issuers – each of the monarchs and archbishops – and for each of the moneyers. There is a listing of central motifs and a scarcity analysis. Again, market pricing is discussed and prices are provided for fine and very fine grades.

In Abramson's opinion, the first, silver-alloy, issues of Eanred and Archbishop Eanbald II, were clearly an attempt to revive the early-penny. It is only with the second issue, towards the end of Eanred's reign, that the coins lose all precious metal content. For this reason the first issue is now included as tertiary Northumbrian sceats in Sceatta List, ed. II.

Sceatta List (first ed.) and Stycas Simplified are in one volume.