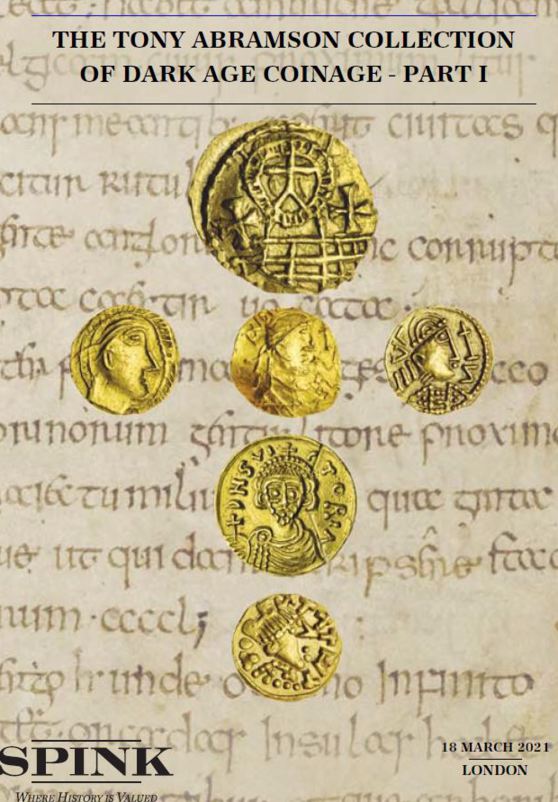 This unparalleled collection of over twelve hundred of England’s earliest coins, dating between the early seventh and mid-ninth centuries, was auctioned at Spink & Son in 2021. The series of sales included:

Most of the coins were metal detector finds from England, unearthed over the last 30-40 years. These coins are tiny - about 1 centimetre in diameter and weighing 1 gram on average – but the designs  - and their variations - are a stunning revelation. The earliest coins are gold tremisses from the Continent (based on the late Roman Victory type) and used for trade in early Anglo-Saxon England. These date to the sixth century.

In 601, the papal emissaries Mellitus and Paulinus were sent from Rome to support Augustine’s mission. These emissaries would have had a sophisticted familiarity wih the economic, fiscal and especially symbolic functions of coinage. The vendor believes that it was under their influence that English gold shillings were issued – initially by King Eadbald of Kent, then by his brother-in-law, King Edwin of Northumbria.

Recent archaeological evidence has demonstrated that it was as early as the 660s that tiny silver pennies replaced the gold shillings after a transitional period. Silver pennies or ‘sceats’ were issued in substantial numbers in the regions bordering the North Sea, but very few have surfaced due to their tiny signature in the soil.

Each region had its distinctive designs, but the pennies were interchangeable. The mix of varieties found on prolific sites plausibly evinces the extent and volume of trade.

Many of the remarkably diverse and intriguing images are little understood, and the coinage is largely neglected by historians, medievalists, archaeologists and art historians - with the obvious exception of Anna Gannon's The Iconography of Early Anglo-Saxon Coinage. The Northumbrian coins are literate naming a sequence of issuers from 627 to 867. The southern and Continental sceats are largely uninscribed and convey in the motifs the evangelising message of this ‘Conversion Period’ to Roman Christianity. They have far more eye-appeal than the later medieval penny with its fixed, crude portrait obverse and cross reverse.

Among the more eye-catching gold shillings are issues of Eadbald of Kent and Bishop Paulinus of York. The silver sceats include those portraying biblical themes such as ‘Get thee behind me, Satan’ and a scene from Bede’s Life of Cuthbert, as well as many iconic types.

The issuers named on the northern coinage are historically document and include excessively rare coins of the patrician king Æthelwald Moll and Eardwulf. Of the few named issuers on the southern coinage, little is known. The collection includes both known whole specimens believed to have been issued by the Northumbrian Bishop of Utrecht, Willibrodr.

The collection has been in the Fitzwilliam Museum, Cambridge for the last ten years and includes three-quarters of all known designs, of which there are more than 700. This pre-eminent accumulation contains numerous unique specimens, many others of the highest rarity, coins of historical significance, as well as many choice and aesthetic specimens. It includes outstanding yet neglected examples of early Anglo-Saxon art. Many of these are most unlikely to be available again to investors and collectors for a generation.

The collection is also an impressively wide representation of sceats – twice the scope any other, including the national collections. The leading catalogue of the coinage, Sceatta List, covers 722 varieties, 75% of which are represented here.

A similar proportion of illustrations in Sceatta List and Sceattas: An Illustrated Guide are from this source. It also provides the entirety of the sceats and stycas, and much of the gold and pale gold, illustrated in the early Anglo-Saxon and Northumbrian sections of the popular standard catalogue Spink’s Coins of England.

Coins from the collection have featured in innumerable articles. To give just two examples, a number of these coins appeared in Anna Gannon’s pioneering The Iconography of Early Anglo-Saxon Coinage and a denier of Melle was illustrated in the ground-breaking Alpine ice-core evidence for the transformation of the European monetary system, AD 640–670 by C.P. Loveluck et al.

In 2018, it became only the seventh privately held collection to feature in the Sylloge of Coins of the British Isles. All the subsequent acquisitions are listed here.